The “Renato Ratti” Museum of Barolo and the wines of Alba 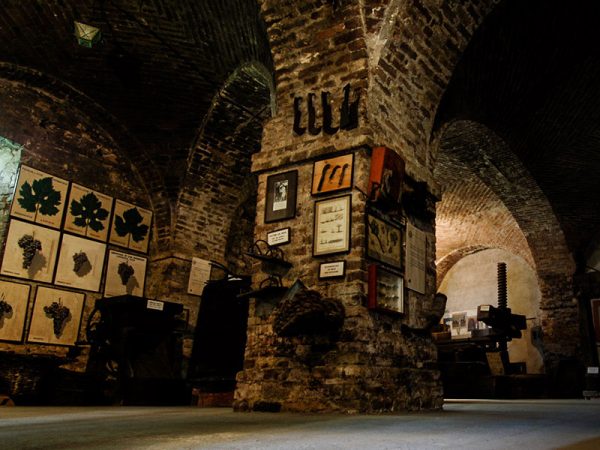 Stepping across the threshold, one enters the Abbey’s cellars, fine rooms with vaulted brick ceilings that guard both jealously and generously, a great multitude of objects belonging to generations of vine workers and wine makers.

In the first room, we find tools and utensils for the cultivation of grape vines, presses of various types and from various epochs, funnels, buckets and “brente” (wooden backpacks!). But among all these objects in wood, what immediately kindles the imagination is a barrel built more than two centuries ago, by simply hollowing a large tree trunk. Besides the sheer beauty of the exhibit, it is the very symbol of Northern enology as opposed to the great terracotta vase, the “dolium,” of the hot Mediterranean climes where objects in wood would have been condemned to short life.

It’s a barrel fashioned entirely out of chestnut, yet another symbol of the “langaroli” the inhabitants of the Langhe area, who derived from this noble tree, wood for their furniture and utensils, leaves for their mattresses and foodstuffs (chestnuts), to sustain themselves throughout their daily travails.
Gathered in the adjoining room are all the many tools for cooperage and wood working and, upon a wagon with balance springs, sits another curious barrel of flat and oblong form: the “carrà,” the precursor of the modern day tank truck. Until 1815 it had a capacity of 492,84 liters, then, with the introduction of the metric system, it was adjusted to 500 liters.

The bizarre Piedmontese measuring system was based, in fact, upon standards that went by the names of carrà, bottali, brente, rubbi, pinte, boccali and quartini. (flat barrels, kegs, casks, pints, mugs and quarters). These recipients used as standard instruments of measure were superintended by the Measuring Office, the ever-feared governmental organism that volume tested every container, either punishing with heavy fines or approving with official notches and leaden seals. As we enter the second large hall of the basement, we may admire the fine exhibit of those objects that allowed the wine to be transferred from producer to consumer. Our curiosity is piqued by an elegant pitcher with spouts in brass, but then immediately drawn by the fine exhibits from the Roman Epoch and by the collection of bottles.

The ancient Romans maintained important communication routes in this region, roads that allowed wine merchants a life of relative comfort and wealth, merchants the likes of one Marcus Lucretius Chresto, who, in the first Century AD lived in town of Pollenzo, and is still remembered today by a magnificently engraved gravestone slab, certain proof of his wealth and high social standing. In those days, the merchants who shipped wine were also called to manufacture the containers, the famous amphorae. The Ratti Museum has plenty of beautiful examples, but what truly sparks the imagination is that some of these same amphorae, recognizable by the winemaker’s trade-mark, were found as far away as present-day Romania, eloquent proof of the broad reach of Alba wines even in those remote times.

Moving closer to our own period in history, we may then admire a fine collection of bottles, intelligently exhibited to illustrate the evolution undergone by this household recipient through the centuries. Our attention instantly cleaves to a curiosity which today has regained significance in light of the tutelage bestowed upon the wines of this zone: the “Albeisa” bottle. In common use until 1730, though actually only serving to deliver wines from cellar to table, (when not using the more common “duja”), with the arrival of Napoleon, such was the servility imposed and expected, that the local bottle was entirely replaced by the standard shapes of Bordeaux and Bourgogne. Among the bottles on display at the Ratti Museum, there is one close to twenty centuries old.

And yet the bottle, this common container, took many centuries to contract its final marriage to wine, indissolubly uniting only in the 18th Century when, thanks to important innovations in glass working techniques, it became possible to produce them sturdy enough to withstand the intense pressures of cork sealing. For this last task, amazing machines were excogitated, at times ingenious, oftentimes richly carved and inlaid: in this room an entire collection can be admired. Leaving the Abbey’s cellars and ascending to the ground floor, one enters a fine parlor with a hearth surmounted by portraits of many famous personages of yesteryear: Tancredi and Juliette Falletti, King Carlo Alberto, Cavour, Giuseppe di Rovanseda, Domizio Cavazza, all of whom played a significant part in shaping Alba’s enological history, bringing it by loving degrees to today’s admirable heights.

The Piedmontese Royals’ penchant for the wines of Alba was proverbial. Just consider that in 1631, only one day after the annexation of the Langhe Fief to their Duchy, the bluebloods that would eventually unite Italy demanded from the township of Barolo three thousand liters of the best wine produced that year (in those days aging was still not contemplated). Resuming our visit of the museum’s ground floor, we dwell a moment on the various topographical maps showing the arrangement of the vineyards, starting already from 1640, and then monographs from the Ministry of Agriculture, vine illustrations, regulations, proclamations, edicts, orders of purchase, lithographs and engravings: all exhibits that invariably predispose one to both the study and enjoyment of wine.

On display in the adjoining parlor are the small objects: flasks, glasses – among which worthy of note is a fine truncated tulip from 1700, typical for the savoring of Barolo – and then the “duje,” terracotta pitchers that were used in the taverns, nowadays the very symbol of Piemontese wine. The Ratti Museum is not dedicated to the history of enology, nor is it a mournful monument to better days gone by. Instead, it promotes a clear and pleasant analysis of the importance that winemaking had in cultural, social and economic terms for the Langhe region, a region which in a way, was once our “Little America,” populated mostly in the 18th Century by people who toiled on small parcels of land seeking and finding relief from hunger.